A Zum in Pelham, MA

After 25 years in their old farmhouse, Tony and Anne were ready for a change. “The old farmhouse had a lot of charm. But, for a 200 year old house, there isn’t much you could do to it to make it energy efficient without spending a ton of money,” Tony said of the family home.

They knew they wanted a home that was smaller, one story and warmer. But they had no idea how to begin the process if building a new home, especially an energy-efficient one. 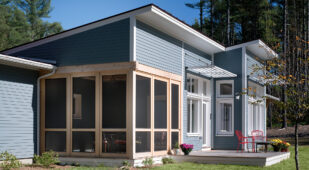 Choosing a builder: the cost question

As Tony and Anne began to explore home designs, they came across a book called Prefabulous + Almost Off the Grid: Your Path to Building an Energy-Independent Home. One of the “prefabricated” homes featured was a Bensonwood project, and this led them to Unity.

“Everytime we thought about what we wanted, we kept going back to the design and floor plans that Unity had,” Tony said. Once they knew what they wanted their house to look like, it then became a question of cost: How could they build this house in the most cost-efficient way?

As they considered Unity, they also talked with local contractors about building the home in a more typical fashion, piece by piece on site. But unlike Unity, these contractors were not able to give them clear and definitive responses to the cost question.

“Ultimately, we decided to go with Unity because we liked the details of their design and we had confidence that we would get just what we wanted and at what cost,” Tony said. “Unity was straightforward and transparent. Clearly a lot of thought had gone into the details of the energy efficient design. We knew the answer with Unity and that was a big deciding factor.”

Transparency and straightforward communication were critical throughout the design and build process. With every design decision that Tony and Anne made, there were cost implications. For example, they reduced the number of bedrooms from four to three in order to have a metal roof (better for solar panels), wood floors, and extra storage space in the garage.

“If you have a budget and you want to stay within that budget, then you need to realize that every decision is a trade-off,” Tony said. “With Unity, those decisions—and trade-offs—were made very clear.”

The choices that Tony and Anne made allow the house to better accommodate their lifestyle. Although some of their decisions increased the final cost, they are happy with the upgrades.

“We opted for a screen porch, which is a wonderful space, and we included a mudroom. I never realized how important a mudroom was, because I’ve never had one before. We absolutely love it!” Tony said. 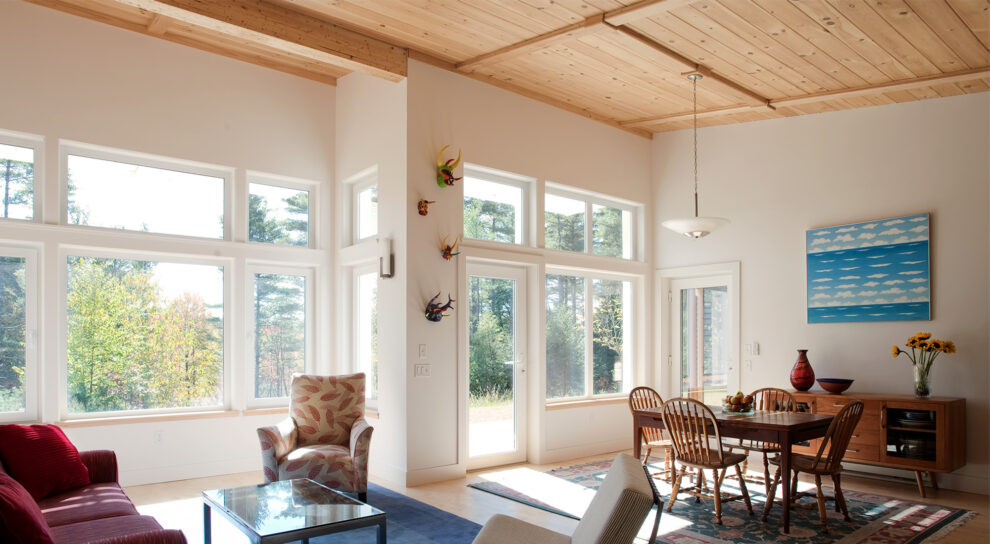 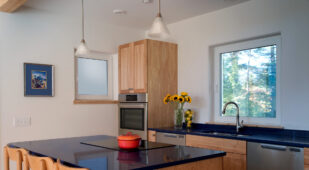 The importance of trust

When asked what he would tell other potential clients about working with Unity, Tony says it goes back to trust and communication. He shares a story about a problem that came up after the shell of the home had been assembled. For Tony, the story is not about the problem but about Unity’s response to the problem.

“Things happen when you a build a new house. It’s expected that problems come up,” Tony says. “We were extremely relieved with how Unity responded to the problem. In fact, it made us trust Unity even more because of that experience.”

“You [Unity] stood behind what you were doing,” Tony said. And that to him was invaluable.

Most importantly, Tony and Anne love their house. The Zum design, with south facing windows, was clearly the right choice for them. “I love waking up in the morning, looking out the window and seeing the world,” Tony says.

For full details and descriptions of all the finishes and fixtures for this particular home, please download the Open House pdf

This project was based on Zum floor plan 243.

In their own words
straightforward and transparent.

Unity was straightforward and transparent. We knew the answer with Unity and that was a big deciding factor.