A Zum in Waterbury, VT

For twenty-five years, Cindy and Bob ran adventure travel companies that brought groups of clients on walking, hiking and biking trips all over the world. Ten years ago they decided to dial back on their traveling, and settle more fully into life in northern Vermont. 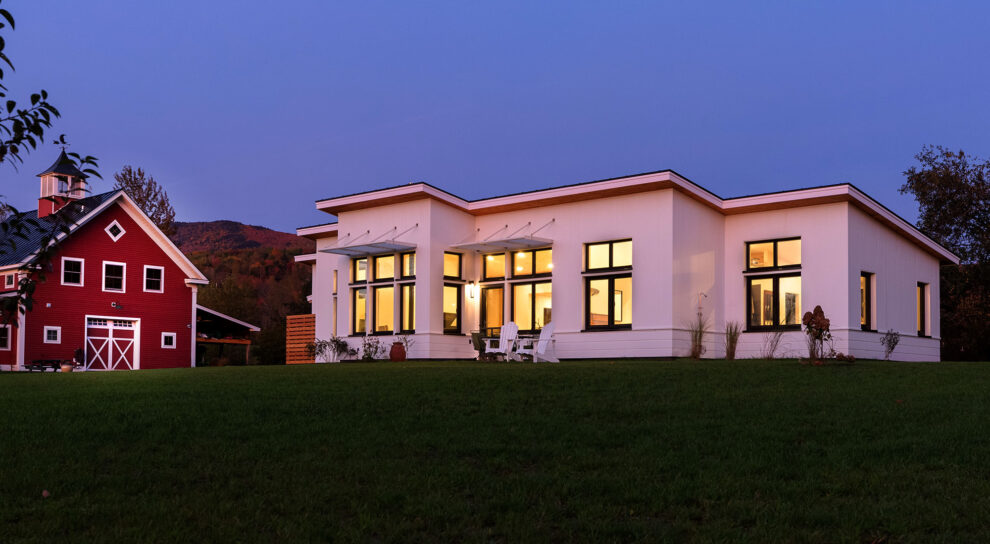 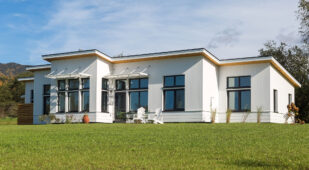 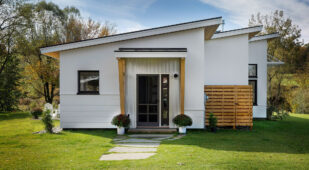 They had lived for many years in a 6,000 square foot house on an idyllic property called Twilight Farm. Cindy has always been an avid gardener, and she was finding that good local garlic was hard to come by. They planted 8 acres with various types of garlic, and built a barn for storage and equipment. Their new venture, Green Mountain Garlic, was off and running.

The barn was located some distance from their house, and eventually Cindy and Bob tired of running back and forth between the two. The house also began to feel too large after the last of their three children moved out. As Bob said, “There were rooms we didn’t go into for years!” They dreamed of a smaller home, one that would be energy efficient, simple to maintain, and close to the barn. And they wanted to be able to easily close up the house when they headed south for their own adventures during the winter.

Their son found Unity Homes online while researching options for building energy efficient homes. Cindy and Bob had a good initial meeting with Dick Struthers at our show home, and were immediately taken with the clean lines and modern aesthetic of the Zum platform. Cindy thought that locating a contemporary house next to their classic red barn would create an interesting juxtaposition. Bob wasn’t so sure, but the contrast has grown on him.

Bob and Cindy appreciated that Unity’s systems result in greater predictability and control over costs. They also knew that the accelerated construction schedule made possible by Unity’s off-site fabrication would be very helpful, because their home had sold within days of being put on the market. And they were looking forward to “walking their environmental talk” by installing enough solar power on the roof to allow for Net Zero performance.

Cindy and Bob worked with Unity’s design team to develop a plan that was informed by their site and responsive to their needs.

Having a large, tiled mudroom entry space is critical for making the transition from working on the farm to relaxing in the house. A closet in the mudroom houses the stacked washer/dryer. The kitchen is larger than typical for a Zum, and it features a walk-in pantry for storing preserved vegetables from the farm. One of the three bedrooms doubles as a home office, giving flexibility for hosting visitors and working from home. The primary bedroom is at the far end of the home, well-removed from the bustle of the more public areas. A deck off the dining area is the perfect spot for watching the sun set over the fields.

Plans for construction came together quickly. When their local general contractor, New School Builders, had an unexpected opening in their schedule, they broke ground on the project in January of 2019.

The house was originally designed to have a full basement for storage, but the excavator hit water 12” down. New School ended up raising the house significantly above the existing grade, and going with a crawlspace rather than a full foundation. The house sits well on the site, thanks to many truckloads of fill that were used to feather out the grade.

Unity assembled the shell of the home on site in February of 2019, and the owners moved into the home that May. 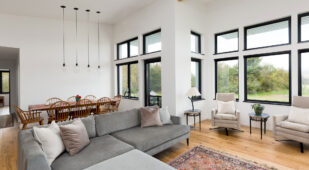 Cindy and Bob have found their new home to be quite comfortable. The thick walls and triple-glazed windows keep the heat in during the winter and out during the summer, and the ventilation system provides a continuous supply of fresh, filtered air. Initially the humidity levels in the house were high, as evidenced by condensation on the windows, but that’s not unusual for new homes, and the issue was addressed by running a dehumidifier. There was also a learning curve for operating the heating and cooling system. We typically recommend that homeowners “set it and forget it,” but finding the right set point for the thermostat can take some experimentation.

Bob and Cindy had a 12.6 kW photovoltaic system installed on their standing seam metal roof, and they’re thrilled that the house is now producing as much energy as it uses – Net Zero performance!

In their own words
On Time and ON Budget

It was a pleasure working with Unity and New School Builders to build our new home.  We found their staff to be very responsive and the quality of materials and workmanship to be top notch.  We’ve been through many building projects and this was by far the smoothest. We ended up with a great, energy efficient home that was on time and on budget